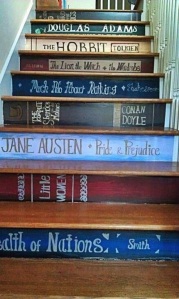 Firstly isn’t the picture epic? Its someone’s stairs that I found on Pinterest.

Anyway, onto this week’s writerly ponderings for me.

Book Titles, some are easy and some are impossible. Previous book titles were my beta reader’s idea as I couldn’t come up with them. Loving Lilly originally going to be called Rescuing Lilly but then I re wrote the story and the title didn’t fit.

Once I settled on Loving Lilly I failed to do my research properly. I didn’t check out other books with the same name thoroughly enough.  There are five other Loving Lily books (slightly different spelling to mine) and one by a hugely successful author.  This caused an issue at the beginning because I had a half dozen refunds on the first day I published. The other author’s book was on pre order. When mine was live I hadn’t told anyone it was there so to get a dozen sales in 48 hours was surprising to say the least. Six were instantly refunded and after badgering Amazon I found out that the customers thought it was the pre order copy.

I am finishing off a trilogy, the first book is due to be released mid January. The working titles for the books are Missed You Once, Missed You Twice and Found You. Now the issue is this. I have had these titles rattling round my head for a year and I now dislike them.

There are other issues as well and I will talk about the marketing side of things.

Ultimately an author wants to be found easily.  Have no ambiguity, I want a person to want to buy my book, go straight to Goodreads and find it on the top of the list when they put the title in. I want them to go into Amazon, iBooks, Kobo and B&N and it be the top book when they put the title in. Easy. People are lazy and if its too difficult to find only the determined will find it. I also want it to be short enough that when you start searching it finds it for you. If you have a book called How To Find……. it will take the fourth word until the search engines can narrow it down.

This is my wish list when releasing a book.

I want, I need, blah blah, so I have to get my arse in gear, January will be soon upon me. I need to find a trilogy of titles that link. To sum up what they should be they would say:

Book One: Missed you completely, fate had other plans.

Book Two: I found you, but fate decided to make it seem easy then Bam! No chance.

Book Three: I have you but fate is not going to make it any way easy.

They are a bit long winded eh!? Now there is murder, deception, kidnapping and love in it too so it then becomes tricky in terms of deciding how dark I want to make the titels.

Decisions Decisions. Well I have decided one thing that is my working titles suck and I need to find new ones.

Do you have an opinion? Tell me.