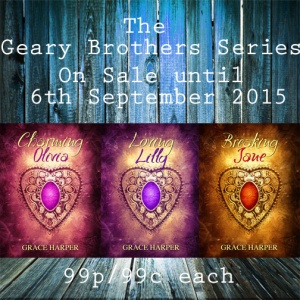 Olivia Gage is a top selling clean romance novelist, but wants to write erotica. Jack Geary leads the lifestyle that Olivia wants to write about. They start talking after a sarcastic written conversation over a review of a corset that he made and a book she wrote.
Over time, they become friends and then he persuades her to spend a week with him. He reasons with her that if she hasn’t experienced erotica first hand then how is she going to write about it.
Charming Olivia is the week she spends with him, each night a different subject, whips & ropes, threesomes, MM sex club and so on. He is determined to talk her out of her clothes and into his bed. Olivia is determined that he is not going to lay a finger on her until she confesses the truth.
Over the year that he has been in contact with her, he has told her exactly what he wants to do to her. She tells him she is married and that is why she won’t succumb to his charms but she is not telling the full truth. Once Olivia reveals what the truth is to Jack, she stands no chance.
Absolutely 18+

Lillian Harrison is trapped in a life she doesn’t really enjoy. From the outside everything looks rosy. She has had a successful career for a decade as a lawyer, money in the bank and her own home. She is lonely and worse still is addicted to Elijah Geary. Elijah Geary owns a popular bar in the centre of Edinburgh, he is ex military and wants to settle down. The highlight of his day is the forty minutes when he speaks to the woman he wants to spend the rest of his life with. Loving Lilly tells the story of Elijah and Lilly and how they dance around each other to find out if they are meant to be together or stay as customer and bar tender. Elijah brings out Lilly’s passion she never knew she had. Happily ever after was never meant to be easy. Loving Lilly is a steamy, passionate tale. The story is for those of you who have passed your eighteenth birthday and like to read about intimacy after the bedroom door has closed.

Breaking Jane is the third and final novel in the Geary Brothers Series.
Jane Spencer was a carefree spirit in the late 1970s where she lived with her sister Gale and their strict parents in the suburbs of Edinburgh. They were both academically smart and had a bright future ahead of them.

When Jane arranged a celebratory party to signal the end of the exams and the start of summer, she never would have organised it had she known what would happen that night.

Fate or luck, kept the Geary family and the Spencer family forever linked after that night. One moment of recklessness has a rippling effect for decades to come.

Secrets, lies and betrayal haunts the sisters, neither of them was the same after that night. The lies that were told wasted time, decades of misery followed.

Find out in the last novel how the secrets are revealed and how the lives of the Spencer and Geary family are changed once again. The story is set in the past as well as the present, where we see how Gale becomes a bitter woman and how Jane turns into a drunk.

Will the sisters ever find peace and love, will the secrets revealed destroy the happiness for one of the Geary brothers?