Another fabulous author is in my comfy hot seat. Georgina Hannan is the author of the Cursed Trilogy, the novels are called, Cursed, Obsession and Absolution. It’s a young adult story about a group of four friends who embark on a holiday together to the gorgeous countryside of Dartmoor, Devon. Each of them is hoping for an adventure, something that they will always remember. However, it isn’t long before they get what they want. The group are plagued by noises after hearing the myths and legends of the area.

Georgina Hannan was born and raised in Surrey, England where she currently lives with her family. She is very close to her twin sister and her mum, they are her best friends. Georgina considers in her heart that she is a home bird, in that she doesn’t like going away from home too much. Her family and partner are all very supportive of her writings, especially her mum as she’s always mentioning her books to strangers she’s just met. [Well done mum- Grace].

She has always had a vivid imagination and has been writing since she was thirteen years old. She is now a self-published author but during the day she wears the hat of a Project Manager for an IT Company.

Georgina’s passion for writing and her pursuit to tell stories began after a creative writing assignment during school. She finished her first tale when she was fourteen and after showing it to people she received good feedback. However at the time she wrote only in notebooks and on paper, as a result those notes were lost. She is in the long process of rewriting this story.

Georgina’s inspirations and imagination surprises her, sometimes the story ideas fly in from every direction. She definitely has a lot of books coming your way in the future. The genres that Georgina writes in are Young Adult, YA Paranormal Horror and YA Paranormal Fantasy. There is also romance too. In the future she would like to try crime writing.

She works full time so she writes when she has free time. She has devised a release schedule as she’s got a lot of stories in the pipeline. Her tendency is to be a planner when it comes to writing her books, character names, relationships and key events. Once that is mapped out, she’ll just write and write and see where it takes her. She writes what she likes and what comes to her not what the industry says. [Hurrah! – Grace]

In her school days Georgina used to play netball at school, she also did line dancing, ballroom and disco dancing. There are plenty of medals trophies for those. [Pictures! – Grace].

When an idea hits her, she writes it down, but at the same time she notes down what she was doing or listening to whilst she got the idea so that it will strike a memory when I come to write it fully. It is at this point that character names are thought about. Once this process is complete she will then write down key points and then start writing. Georgina’s Cursed Trilogy is written in the third person but she tends to write what comes naturally.

What is the overall message that Georgina is putting across in her novels? Well, true love will always prevail, of course. The messages will change for her over time and as her genres change, but that is the current message.

When she was younger and in school her mum thought it was mufti day (home clothes) at school so she gave her and her twin sister a £1 and sent them to school in their non uniform clothes. They both told their mother over and over that they didn’t think it was mufti day but she was adamant. When they got to school, everyone was in their school uniforms except them, as predicted. They were so embarrassed as everyone stared and she hated being the centre of attention.

When it came to publishing her first book, Cursed from the Cursed trilogy, she self-published because she wanted to have full control. Her family didn’t believe she could do it back then, as her stories had always been a private thing and no one believed in her. It was hard for her to gain the self belief she needed to take that next step. She is so glad she did. She writes the stories she wants to read, ultimately she has to reread her writings and if she doesn’t like it then how can she edit but also unleash them to the world? [Good point – Grace].

She could write something she didn’t believe in but it wouldn’t be a very good story in her opinion as it wouldn’t have much feeling for her. She’ll research definitions and then look at what it is and learn more so when she writes about the subject again she can sound a little like an expert. The initial idea stage is her favourite part of the writing, the planning the eagerness to get writing.

So, Georgina’s advice for aspiring authors? Keep writing and get involved – get your name out there even if you haven’t published yet. Us authors are a friendly bunch so come and befriend us. [Yes, yes, we are – Grace].

She is a bit of a fan of Lauren Kate because of her writing and she wants to be as successful as her one day. She loves her “Fallen” series and would love to talk to her about it.

Editing is a common thread for least liked aspect of the publishing process. She will write her first draft then put it down for a bit. Picking it back up and doing a read through and do a few self edits (she learnt a lot from her books and self editing books) and then she passes the manuscript to an editor and beta readers. Once she receives the additions and edits, she can be happy with the finished product.

[My favourite question has been answered – Grace] I asked Georgina: William T Vollmann reportedly said in 2000: “Well, the best way [to improve your female characters] is to have relationships with a lot of different women. What’s the best way to do that? It’s to pick up whores.” How far would you go to improve your writing?

Not that far! I will go as far as my comfort zone and legal laws allow but I have to remember I have a reputation to up hold and a partner I love and family who support me – I can’t let them down by being reckless.

Let’s move on to the next release for Georgina Hannan. The latest book she’s released is Another Life. It’s her first standalone book as her other three are part of the Cursed Trilogy. Another Life is a Young Adult Paranormal Fantasy. She really enjoyed writing this book as she learnt a lot whilst doing it. It features themes of depression, love and determination.

Lily’s only escape from her tortured reality is the dream world, and the guy she’s made up.

After trying to take her own life and surviving therapy, her life moves forward as she begins university. However, soon her reality and dream world begin to merge and her once grey world takes on the adventure and excitement she always wanted as she begins to learn she isn’t who she thought she was and that her dream guy is in fact real.

Follow Lily on her journey of love, truth and self-discovery as she faces problems that would test even the strongest person.

Now, I am very excited to give you a cover reveal, Georgina’s next book after Another Life is called Serial Dater and here is the cover: 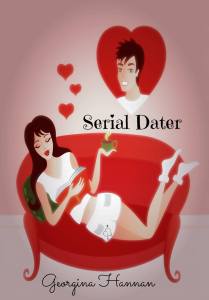 You can find Georgina at the following places, she’s really chatty so go friend her: