The Sensual Collection ~ The Complete Series

Prepare yourself to delve into scenes of pure delight as the stories unfold before your eyes, taking you on a journey of your own pleasure and desires.

Welcome to a world of intrigue, erotica and powerful sensations.

To read is to dream, to read erotica it to fantasise.

With a divorce she’s not ready to leave behind, Leah begins to discover for herself what has been lying dormant inside her for too long, the passion she hasn’t experienced before and the fantasy she plays out by herself. And when a mystery man enters the café she is sheltering in one day, he turns her world upside down.

Will she be able to be brave enough to take his hand and submit to him?

Two friends meet again after circumstances in their lives have been all but kind. But Polly has her reservation about the man who she admired from afar; the man who she doesn’t think had treated the women in his life right.

Claire shouldn’t have seduced the one man that was forbidden. Her boss.

But she did it anyway.

Taking a risk on the office gossip she overheard, she wanted to bring him to his knees between her thighs, giving her the power she craved. But nothing should have been that easy, should it?

The game didn’t take long to turn into something less appealing, something that even Claire no longer enjoyed.

Sadie had been friends for as long as she could remember with Tyler but his unpredictable ways kept her from spilling her true feelings for him, until the night the drink made her brave.

His reaction nearly broke her though.

Would he be able to forget what she confessed and start again? Or has their friendship been destroyed for good?

Leaving the bright lights of London behind in the early 90’s, Amelia J Hunter is an indie writer who lives in the Irish countryside with her family, a good coffee maker and plenty of fresh air. 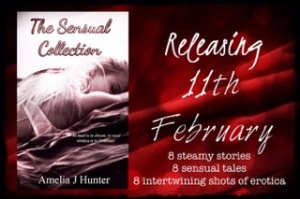